EVERY MAP HAS A STORY.

Discover how Correlator3D is used globally.

Drone vs Aircraft: Which One is Right for your Mapping Project?

Drones can be great, but their limited flight times as well as restrictions on flying height and line-of-sight operation make them most suitable for smaller mapping projects. For example, a two-man crew during an 8-hour day could launch a drone a maximum of 6 times over an open field (assuming a 1-hour flight duration with 30 minutes of transfer time between flying missions). Taking the line-of-sight requirement into account, this would allow the crew to capture approximately 6 square miles. An aircraft could capture that same area in a matter of minutes. Given their large fuel tank, aircraft can acquire entire cities or even counties in a single day of flying.

There are many projects out there that do require a much smaller area of capture. If a project can be acquired within 2 to 3 hours and/or 1 to 4 flights using a drone, it might be a practical solution. The smaller the project is, the more likely it is suitable for acquisition by drone 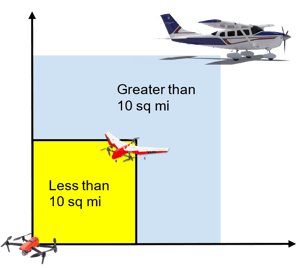 Mobilization to and from the project site must be factored in. For drone operators, the closer the mapping project is to you, the less time it will take to mobilize. Time is money, and there is only so much sunlight in a day. In an urban area such as Los Angeles, traffic can limit you to a mobilization radius of 10 miles within an hour's driving time. In more rural areas, you may be able to mobilize out to a distance of 40 miles. Realistically, 2 hours of mobilization and an additional 2 hours of demobilization restricts your time on site for acquisition to 4 hours.

Most aircraft based mapping or aerial acquisition companies operate near the airport, if not on the airport in which their aircraft are hangered. This allows them to mobilize rapidly, once in the air a smaller aircraft can mobilize anywhere within a 300-mile radius in about 2 hours. With 3 to 4 hours of data acquisition time to acquire data and another 2 hours to return, the amount of data that can be captured far exceeds that of a drone.

Factor in the acquisition of multiple sites in a single day, and the benefits of aircraft may become exponential. There are places, especially isolated locations where there may not be an aircraft-based mapping or acquisition company nearby. In this case, drone mapping may be a viable option. 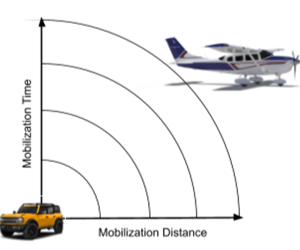 Flight restrictions can play a big part on your ability to acquire data in a specific location by drone. Issues such as line of sight, can greatly limit your ability to capture data. Surrounding terrain and how it is affected by line-of-sight should be considered. Restrictions on what or who you can fly over still exist. Even if they can be mitigated with waivers, these take time and have an associated cost.

Both drones and aircraft have to deal with restricted airspace, but those restrictions are typically harder to mitigate with drones rather than aircraft. Aircraft can be in and out rapidly, drones tend to be on site much longer. This is a big factor when trying to gain access in or around an airport for example.

Aircraft in general can gain access to airspace and acquire data with minimal interference.

Drones can capture higher resolution imagery due to their restricted flying height and ability to operate at lower altitudes. Additionally, they can capture higher density lidar data for the same reason. This does not mean they capture more accurate data.

Many drones operate with commercial off-the-shelf cameras that have rolling shutters which can cause issues when correcting for errors. Additionally, the lenses used are not necessarily of the highest quality. Fortunately, advanced photogrammetry software suite such as SimActive’s Correlator3D will perform a calibration as a step in the aerial triangulation process. Another issue is that drone-based systems do not have any compensation for image motion. Image motion during acquisition presents itself as blur in the images. This can be magnified in drone-based acquisition due the speed at which they cover the ground from such a low altitude. Blurry pixels can also propagate errors in the mapping process.

Aircraft-based sensors carry what are known as metric cameras. This means they are designed with materials that do not allow atmospheric conditions to compromise their shape or structure. The lenses are inspected for occlusions or deformation, and they are meticulously mapped to understand their geometry. This process is called calibration and it is done by the manufacturer as part of the build process. These sensors are often placed in mounts that compensate for the motion of the aircraft including forward motion. As a result, the quality of each pixel in an image from these cameras can be extremely clear.

Drone-based systems with image sensors typically are not mated to a high-quality inertial measurement unit (IMU), which provides the relative position of the sensor in the air. This, along with a high-quality airborne GPS receiver which provides the absolute position of the aircraft during exposure, are paramount to obtaining accurate data and delivering accurate mapping products. Again, some photogrammetry processing software can mitigate this in the aerial triangulation process, but it may require additional work in other areas such as survey control.

Aircraft-based acquisition systems in general work with military grade IMU’s and airborne GPS. As a result, the image positions also known as exterior orientations (EO) are very precise. The more precise these are, the simpler it will be for the photogrammetry software to produce high- quality mapping deliverables.

As an example, the American Society of Photogrammetry and Remote Sensing (ASPRS) is the default source for mapping standards in the US. Below is a vertical accuracy table for digital elevation data and the contours that can be supported from them. 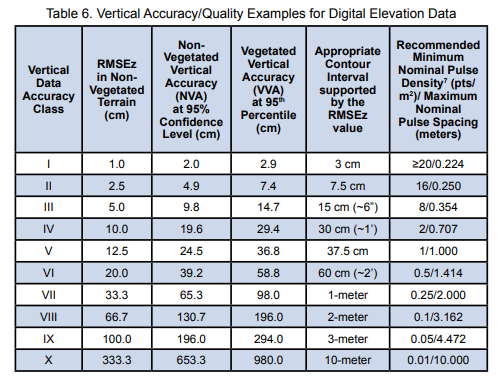 Last but never least is budget. How much time and effort will it take to acquire data over a project site and process out mapping deliverables with a drone vs an aircraft must also be considered. This is predicated by the 4 points listed above.

However, in several circumstances, an aircraft-based solution is more likely to be the better option. It is true aircraft have a much higher operating cost but given the fact that they can mobilize and acquire multiple sites per day, these costs can be mitigated. Drones on the other hand will typically occupy a two-man crew for most of the day capturing one project.

From a processing standpoint, it is the number of images in a project that takes up processing time. What can be captured in a thousand images with a drone can be captured in twenty with an aircraft-based system. It seems counterintuitive that larger areas can be processed faster than smaller ones, but nevertheless remains true. Each additional image will impact processing no matter what sensor.

Additionally, acquisition from aircraft can require less ground survey due to the footprint of the images captured, when compared to drones. Time is money on the ground and in the air.

One should remember that any successful mapping project requires the use of the right equipment operated by skilled technicians or professionals. Also, post-processing of the data has to be taken into account and the right photogrammetry software product must be selected. SimActive’s Correlator3D supports most sensors from drones, aircraft and satellites, capable of ingesting an unlimited number of images and with workflows developed to efficiently process these types of projects. Additionally, processing software needs to be scalable to support projects as they grow. In that respect, Correlator3D can process an unlimited number of images from any sensor from a single workstation and/or via distributed processing.